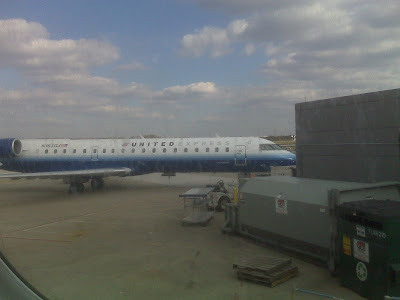 View from seat 1A.

Boarding was the typical IAD A-terminal mob scene. Today's special? Boarding two flights, not just via one gate (very common at the IAD A gates), but by only one of the two doors. Already one girl fled this plane after discovering that it was bound for DFW, not ELM!

I think if I were to end up going to the wrong city, other things being equal, I'd rather end up in Dallas than Elmira!